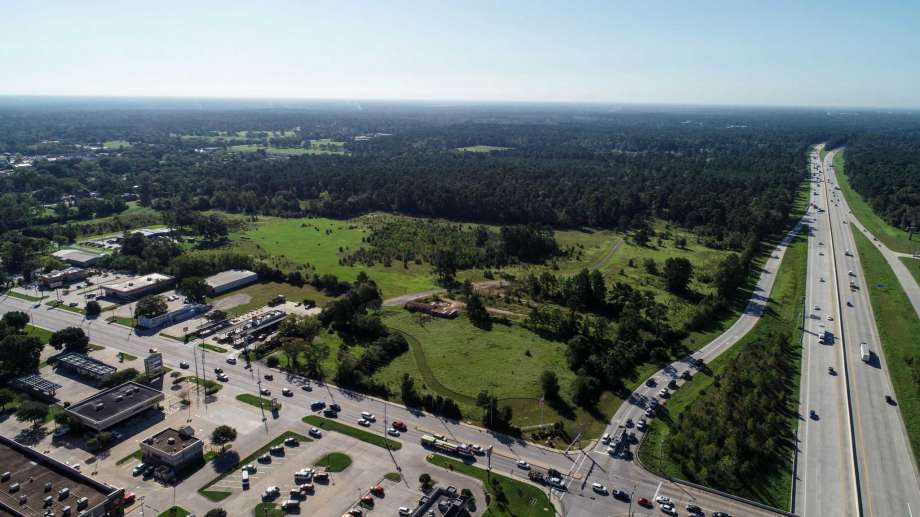 An aerial view of Moran Ranch, which was recently purchased Houston-based Satya Inc. and Stolz Partners of Alpharetta, Georgia. The two firms plan to turn the property into a 500-acre mixed-use development on the border of Willis and Conroe. PHOTO COURTESY OF STAY INC. AND STOLZ PARTNERS

Houston-based Satya Inc. and Stolz Partners of Alpharetta, Georgia, teamed up to purchase the tract in Montgomery County, which was formerly the site of Moran Ranch. The property is located between Interstate 45 and State Highway 75 on the border of Willis and Conroe. On the other side of I-45 is The Woodlands Hills, a 2,055-acre master planned community being developed by Dallas-based Howard Hughes Corp. (NYSE: HHC).

The partnership between the developers, dubbed MRSS Partners Ltd., paid an undisclosed price to buy the property from 27 heirs of W.T. Moran, a local oil and gas magnate who used the land for social gatherings and hunting parties. The deal closed last month after about a year and a half of negotiations, said Satya CEO Sunny Bathija.

“It was a complex process to reach consensus among Mr. Moran’s 27 heirs, who all had an undivided share in the property,” Bathija said. The Moran Ranch property is divided between the extraterritorial jurisdictions of Willis and Conroe, both of which have agreed to annex the community, Bathija said.

“Both cities have been very helpful and cooperative,” Bathija said. “They are excited by the prospect of greatly expanding their tax base in the area.”

While he wouldn’t disclose how much the partnership paid for the property, Bathija said plans for the new development call for an initial investment of about $40 million to build out the local infrastructure, including a 1.2-mile frontage road along I-45. Bathija said he and his partner, Will Stolz, founder of Stolz Partners, are in negotiations to sell 230 acres of the parcel to a national home developer, which plans to build about 800 single-family homes in the area.

The remaining portion of the property has already been zoned to allow for about 180 acres of commercial development along I-45, 12 of which are designated for a multifamily development.

Stolz said the partnership has already sold a 36-acre parcel to Houston-based Fidelis Realty Partners, which plans to build a grocery store-anchored retail project at the corner of I-45 and West Montgomery Street. Fidelis also has an option on an additional 30-acre parcel owned by the partnership, Stolz said.

“The retail component by Fidelis is really the catalyst that’s going to help the rest of the project really take off,” Stolz said.

The plan is to allow the Fidelis project to become established while the infrastructure work on the rest of the property is completed over the next few years, Stolz said.

“That will help drive demand for people looking to live in our community, as well as The Woodlands Hills community,” he said.

Bathija added: “This is really the only major commercial development in the area, which is kind of the missing piece. As we always say, commercial follows residential.”

The partnership is working with land planners from Katy-based Meta Planning & Design, as well as engineers from Montgomery-based L Squared Engineering and traffic engineers from Houston’s BGE. The deal was financed by Laredo, Texas-based IBC Bank.

The new community will retain the Moran Ranch name, which Stolz said will build on the property’s legacy. “This is a property with a neat history that is well known in the area. We thought it was a good idea to keep the name because of its connection to the community,” Stolz said. The Moran Ranch development is just the latest investment Satya Inc. and Stolz Partners have teamed up on.

Stolz said the two firms came together to invest in The Sophie at Bayou Bend and Giorgetti Houston, two high-end luxury condominium projects in Houston. Those projects are scheduled to be delivered next year and are being marketed by the local firm formerly known as Sudhoff Cos., which recently entered into a joint venture with New York real estate brokerage firm Douglas Elliman.

Stolz said the average condo price in The Sophie and Giorgetti will be around $2 million.