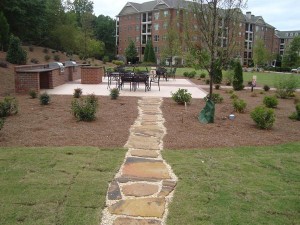 An Atlanta-area developer replaces an undeveloped condo slab with a park.

ALFRESCO AMENITY: An open-air dining area is now part of the Sterling at Dunwoody condo complex, whose developer, The Providence Group, chose to install a community park where a fifth building was originally intended.

It’s a classic case of turning lemons into lemonade.

The plans for Sterling at Dunwoody in an Atlanta suburb called for five buildings, each with 48 condominium units. Three of those buildings are complete, with only 20 units in the third still unsold as of last Friday.

The fourth building was 80% completed when the project’s lender went under. The fifth building had been started, with an undeveloped slab and a 75-foot-wide by 200-foot-long parking garage, raised 10 feet off the ground, that was described as “an eyesore” by Warren Jolly, owner and president of The Providence Group, the project’s developer and Atlanta’s fourth-largest builder.

Providence had already invested $3.8 million into the fifth building and parking deck, and Jolly estimates that it would have cost another $4 million to complete. Meanwhile, several other local residential buildings that Sterling at Dunwoody competed with were acquired by the developer Starwood Capital Group. Starwood “repriced” those units, making competition and future profitability even tougher, says Jolly.

A new lender—which had taken over the assets of the failed bank through an agreement with the FDIC—asked Providence for options about what to do with the property. The developer made two decisions that could be seen as signs of the times.

First, it brought in a group of individual investors whom Providence had worked with previously. That group acquired the fourth and fifth buildings, and agreed to put up the money to complete the fourth. But instead of completing the fifth building, Providence and the investor group chose to remove the slab, raze the parking deck, and install a community park.

The park, according to Providence, includes a dog park, raised vegetable plots, a natural seating area overlooking an outdoor amphitheater, an outdoor kitchen with grill and counter space, and a lighted dining patio with seating.

Because many of the existing condos don’t have greenspaces, the park is another desirable amenity, says Jolly. “The winners are the existing 124 residents who will now see their community completed,” he says. Twenty-eight of the 48 units in the fourth building have floor plans or price points that aren’t available in the other three. And Jolly notes that because the fourth building has a view of the park, some of the residents in the third building have expressed an interest in buying a unit in the fourth.

Jolly estimates that Providence and its investors spent $310,000 to convert the slab into a park, and to complete the landscaping around the community. While the investor group takes ownership of the latter two buildings at the end of the year, Providence will continue to manage the community’s homeowners association. “For the residents, the whole thing will be seamless,” says Jolly.

When he spoke with Builder last week, Jolly said Providence was selling the last 20 units in the third building to pay down its debt. Those move-in units range from 1,400 to 1,500 square feet and are selling for $174,900 to $207,900, which represents recently reduced pricing.